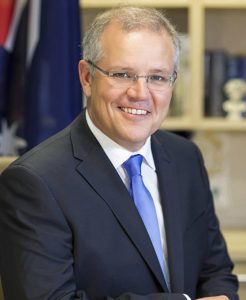 The Crawley family, who live in his electorate, has been devastatingly affected by mitochondrial disease (mito), and Mr Morrison has provided support to them and our cause.

The foundation thanks Mr Morrison for his ongoing support of both the foundation and families affected by mito.

“Supporting medical research to improve diagnosis and treatment and, ultimately, find a cure for mitochondrial disease, as well as helping the people and families affected by this debilitating disease, is vitally important work.”
–   Prime Minister Morrison 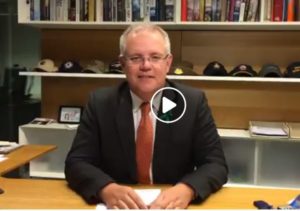 Watch Scott Morrison highlight the work of the Mito Foundation (incorporated as the Australian Mitochondrial Disease Foundation – AMDF) and Stay in Bed Day.

Watch Scott Morrison’s tribute to Kara Crawley who lost her battle with mito. Mr Morrison spoke in the Federation Chamber.

Professor Sir Doug Turnbull is the Director of the Wellcome Centre for Mitochondrial Research. Professor Turnbull’s focuses on understanding the molecular mechanisms underlying the neurological features in patients. With colleagues he is searching for new therapies for patients and he has been actively involved in work to prevent the transmission of mitochondrial DNA disease using an IVF technique called mitochondrial donation. 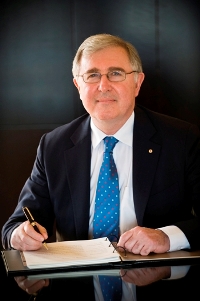 Professor Ed Byrne is a renowned neuroscientist who has made significant contributions to the study of neuromuscular disorders through his work in the fields of clinical work, research and education. He is currently the vice-chancellor at Monash University.

He began his career in Adelaide after graduating with first class honours from the University of Tasmania in 1974. He was made Neurology Registrar at Royal Adelaide Hospital in 1978. In 1983, he was appointed Director of Neurology at St Vincent’s Hospital and Professor Clinical Neurology University Melbourne in 1992.

Professor Byrne was a founding director of the Melbourne Neuromuscular Research Unit and the Centre for Neuroscience in 1993. He was also made Professor of Experimental Neurology at the University of Melbourne in 2001.